Every ending has a new beginning. Greek Startup Univ …

Every ending has a new beginning. Greek Startup Univ …

Every ending has a new beginning. Greek Startup Universe prepares for conquering new frontiers in Europe!

Greek Startup Universe Closing Ceremony successfully took place online on the 3rd of June. The initiative ran under the auspices of the Central Union of Municipalities in Greece (KEDE), the General Secretariat for Public Diplomacy and Greeks Abroad, and the General Secretariat of International Economic Relations and Openness of the Hellenic Ministry of Foreign Affairs and is supported by the Enterprise Greece. 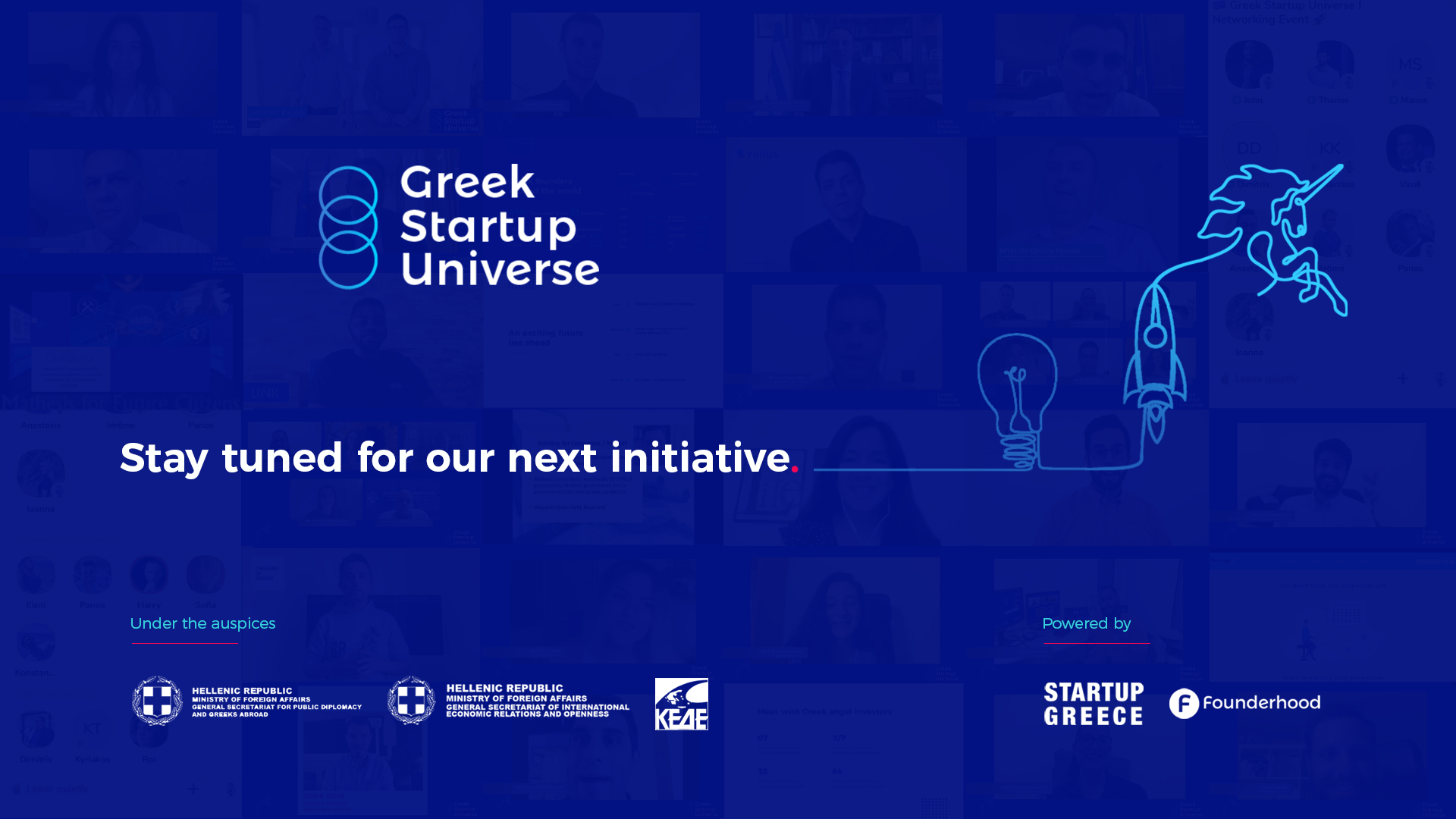 The initiators of the Greek Startup Universe were the first to appear at the Closing Ceremony. Thanos Paraschos, Managing Director of Startup Greece, and Dimitris Dimosiaris, Co-Founder of Founderhood – the platform where the program ran – said they were delighted seeing the program’s positive outcome and impact. It was also pleasant to realize how everyone who contributed to this was eager to support each other, feeling they were part of something bigger.

The Deputy Minister of Foreign Affairs for Diaspora Greeks, Konstantinos Vlasis, gave a welcome speech as a warm supporter of the program since the beginning. The Deputy Minister of Investments and Development in charge of Research and Innovation, Christos Dimas, who also participated in the event, referred to the importance of the Greek Startup Universe for the extroversion of the Greek innovation ecosystem. Moreover, he elaborated on the Ministry’s actions regarding the startup ecosystem’s development through Elevate Greece and the aspirations of turning the district of Attica into an innovation center for Greece and SE Europe. The Secretary General for International Economic Affairs and Chairman of the Board of Enterprise Greece, Yannis Smirlis, as another supporter of the program, commented on the positive impact the program had for promoting Greek innovation entrepreneurship and attraction of investments.

The Cabinet Expert at Cabinet of European Commissioner Mariya Gabriel for Innovation, Research, Culture, Education, and Youth, Isidro Laso Ballesteros, who represented the European Commissioner in the Closing Ceremony, emphasized the Commission’s willingness to support “weak” innovation ecosystems across Europe. He also said he was very happy to see that such an initiative started in Greece.

Moving to the main part of the event, Dimitris Dimosiaris presented the Greek Startup Universe outputs and some stats regarding the 300 participating startups. At the moment, almost 10% of them are now in contact with Greek angel investors claiming potential funding. All of this aside, all the participating startups can join the US Soft Landing Program in early July, which will support them in entering the American market. It is organized by the GSU’s strategic partners, CyprusInno and Greektech, with the support of the U.S. Embassy in Cyprus.

An important statement of Dimitris Dimosiaris was that the next goal for the whole Greek Startup Universe initiative is scaling it at a European level by creating the European Startup Universe. Also noteworthy is Isidro Laso Ballesteros’ reference to the Commission’s intention to contribute to this to strengthen Europe’s startups.

During the event, some of the program’s startups were also presented. In the last part, a panel discussion followed with some of the program’s experts sharing their experience with the startups. The panelists were Maria-Christina Tsitsopoulos, Community Builder & Empowerment Coach, Aspasia Iosifellis, Managing Director Foreign Exchange of First Republic Bank, Athanasios-Antonios Leontaris, Managing Partner of Ratio Legal Services, and Xristos Silaidis, Global Technology CEO. Moderation was by Konstantina Koulouki, a member of the organizing team.

The ceremony came to an end with a networking event taking place on Clubhouse. Greek Startup Universe’s organizers and startups, and people from the national and international innovation ecosystem connected with each other, exchanging thoughts and ideas.

We use cookies to ensure that we give you the best experience on our website. If you continue to use this site we will assume that you are happy with it.Ok